Elon Musk, the billionaire CEO of SpaceX and Tesla, has another company called Starlink that has been launching hundreds of satellites into space, with the aim of offering high-speed broadband internet to subscribers, even while they are on the move. This is what you need to know. We are going to start by explaining what exactly Starlink is, so that you can understand the concept of the product. Then, we will go on to tell you the main features about its operation, and we will end with the price that it initially costs during its beta program.

What is Starlink and how does it work?

Starlink, a division of SpaceX, Elon Musk’s aerospace company, uses a constellation of 1,700 small satellites in low-Earth orbit to provide broadband internet access to customers on the ground who have a signature antenna.
The goal is to cover the planet with affordable and reliable broadband connectivity, with an emphasis on communities in remote areas that have little or no access to internet services, the company says.

Starlink’s basic plan promises a satellite connection speed of between 50 and 250 Mbps, with a latency of between 20 and 40 milliseconds. The Premium plan, meanwhile, promises speeds of 150 Mbps to 500 Mbps, with the same latency. Although there will be brief periods without connectivity, the company assures that this will improve as its satellite network increases.

The idea of the Starlink company is to have around 12,000 satellites in orbit, and that you can then pay a monthly fee to connect from anywhere with the device you have. The idea is not to compete with fiber or 5G connections, but to complement both offers with yours.

Currently there are also other satellite connection companies, almost always focused on rural environments. And there it is also trying to pull Starlink, due to the attempt to provide service in those areas that are difficult to access for fixed networks, and where the coverage of mobile networks does not reach well either.

In the tests carried out by Starlink during the beta phase that has also reached Spain, it is noted that Starlink connections achieve speeds between 50 Mbps and 150 Mbps, with a latency of between 20 and 40 milliseconds. However, it is warned that there will be short periods of time in which the connection is lost, and that during the beta it will not reach all of Spain at the moment.

Starlink consists of a kit that you have to install in your home to receive the signal from the satellites, so it is not a network that you will be able to connect to from your mobile, but rather at home. Nor is it something that is going to replace domestic connections, since with such high latencies, it would be impossible, for example, to use online video games effectively.

Therefore, it is more a network designed for those areas of the geography where fiber does not reach, and 4G or 5G connections fall short. In these cases then you will have the alternative of opting for this other alternative.

The operation of this system is quite simple. What SpaceX is going to do is create a huge network of satellites that orbit the earth. There will be so many, that they will cover every corner of the planet. These satellites will use the propagation of electromagnetic waves through a vacuum to send their signal.

At home, you hire the service and you will receive a kit to mount the antenna at home. This kit is configured for your specific geographical area, so you cannot borrow it. The kit will have an antenna that you have to plug in and point to the sky, where it will receive the signals. These signals will be sent to the WiFi router that is included in the kit, and with it you will have the connection at home.

As indicated on the Starlink website, the kit’s antenna must be placed in an elevated area and / or free of obstacles, such as a tree, a fireplace or a lamp post. Any of these obstacles can interfere with your connection and leave you without the internet.

How to contract Starlink and how much does it cost

Starlink has a fairly high price, and is made up of several payments. On the one hand, you have to pay the price of the hardware kit, which is the one with the antenna, the router and all the cables. Then, you have to pay for the shipping, and lastly, you also have to pay your monthly fee. This is the breakdown of the price it will cost you to access the Internet for this service: 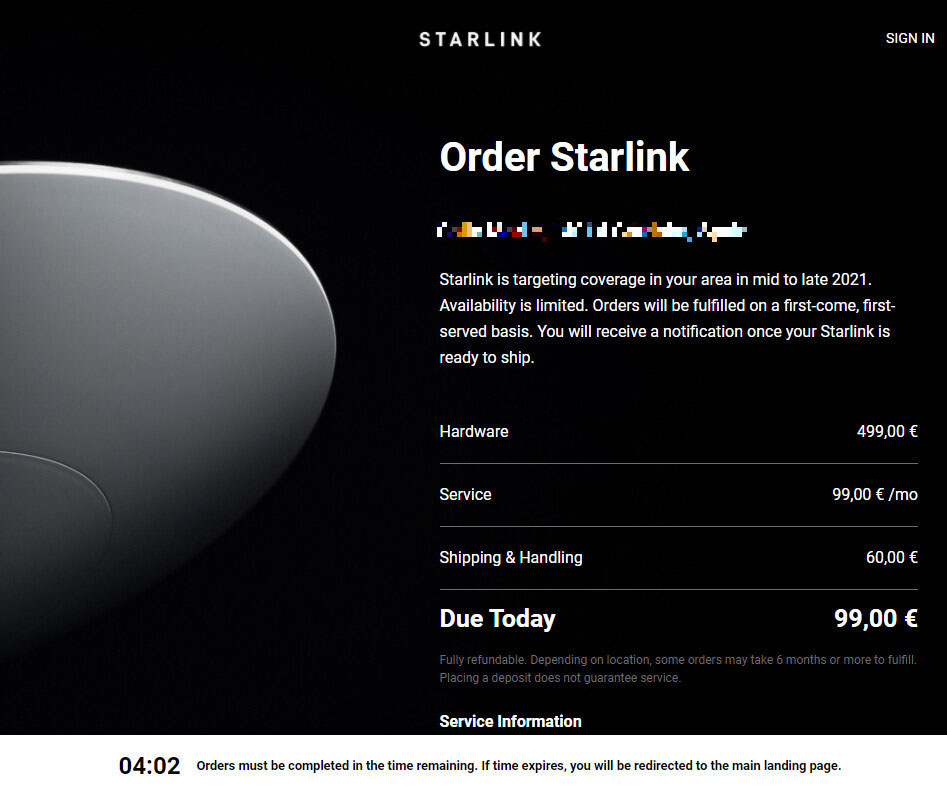 Before hiring Starlink, the first thing you should know is if the service is available in your region. To do so, just visit the company’s site and enter your home address.

If there is coverage in your country of residence, you can continue with the subscription process. Otherwise, it is possible to make a deposit to reserve the service when there is availability.

As part of the cost you must consider the one-time charges for the purchase of the installation kit (which includes a satellite dish, a router, a tripod and cables) and the shipping and handling costs. If you paid for a reservation, it will be considered as a credit towards the purchase of the equipment.

By the way, you should not forget the monthly cost of internet service either. The Basic plan in the United States costs $99, but prices vary depending on the country you live in.

If the speeds of the basic Starklink plan do not seem convenient to you, the company launched a Premium version in 2022, which offers speeds more than twice those of the standard service.

According to Elon Musk’s company, Starlink Premium offers speeds between 150 and 500 Mbps compared to 50 to 250 Mpbs for the basic plan. These are the prices of the service in the United States, without considering taxes:

Do you really need Starlink?

Although in theory Starlink is for anyone who wants to hire it, you have to consider the cost and speed. The service costs up to two or three times more than a regular Internet connection and works at half the speed offered (promised) by traditional companies.

If you thought that because it is a satellite internet you could take it wherever you want, you are wrong. The company itself clarifies that the service is restricted to the area where it was contracted, so do not think that you can take the antenna with you.

For the same reason, Starlink clarifies that, at least in a first stage, it aims to provide internet access to areas where traditional companies do not provide coverage.

If you still think you need it, the company recommends installing the antenna at an “elevation as high as possible”, where you have access to a clear view of the sky, that is, free of obstacles. “Users who live in areas with many tall trees, buildings, may not be good candidates for initial use of Starlink,” warns the firm.

Because the service requires a clear 100-degree field of view, the company recommends using the Starlink app ( iOS and Android ) to self-assess if you meet the requirements. Either way, Starlink estimates that as it has more satellites, the field of view restrictions will be reduced. But, for now, it is not something that is for everyone.

How much does a Starlink dish cost?

Starlink currently costs 99 euros a month. You’ll also have to pay a one-time 499 euros fee for the Starlink satellite dish and Wi-Fi router, which the company will ship to your home.

In case you regret it, because Starlink does not guarantee to be able to provide service in your area, you have 30 days to request a full refund of what you have paid. When you go to register on the web, it will also tell you when it plans to have connection coverage available in your area.